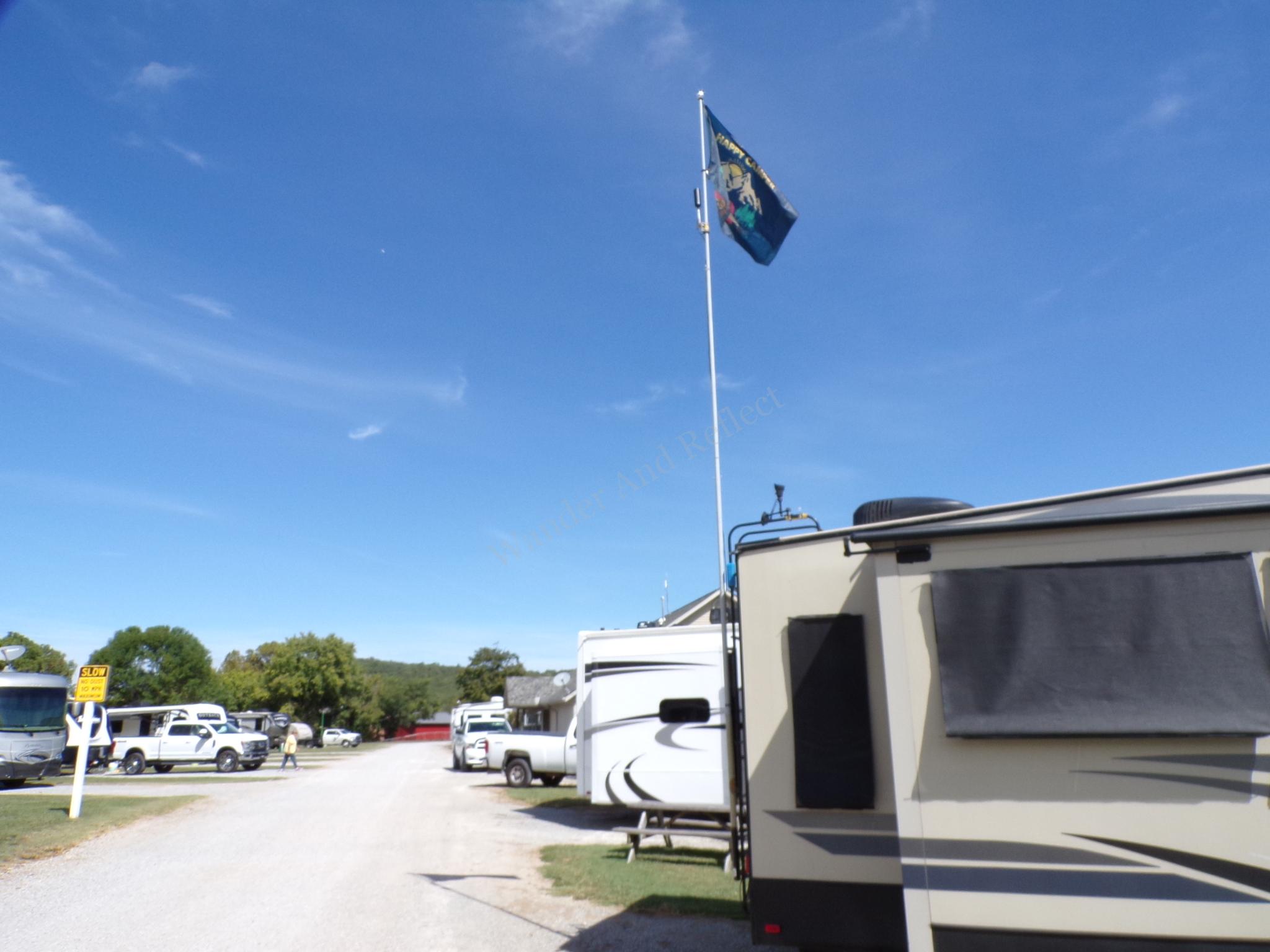 Improve your WiFi and cellphone signal while showing your patriotism.

One of the biggest hurdles to full-time RVing is reliable internet. So you’ve done all your research. You know that campground WiFi is usually unreliable and slow. You’ve chosen a main carrier and found a data plan that fits your needs. You even have a backup carrier for those times when your main carrier has poor coverage or is experiencing issues. Off you go with your new phones, routers, and contingency plans. Things are great and the internet puts the world at your fingertips until your first night of a week-long stay at that gorgeous campground on the river. The trout are practically jumping into your skillet, but nobody on Instagram knows because your one bar of signal keeps fading in and out. We’ve all sung that tune, but there is hope!

Our first 9,000 miles as full-timers was great. Our $25/month unlimited plan from Visible worked like a charm. On the rare occasion it got slow we just used our Verizon phones as hotspots and kept right on surfing the web. Then we stopped outside Foley, AL at the Escapees Rainbow Plantation RV Park. Hurricane Sally had pummeled the campground only weeks before and intensive clean-up would still be going on around the area when we left two months later. An outside vendor had offered pay-as-you-go internet service in the park, but all of their equipment had been destroyed. Our cellphone signal would swing from stone age to non-existent. We assumed the storm had damaged cell towers and things would be repaired soon. Unfortunately, talking to a number of regulars we found that the park sits in a dead zone. . .it’s always had horrible service from all the major carriers.

What do you do when you’ve paid for two non-refundable months and have to have WiFi to work? The time had come to invest in a cell phone signal booster. I’d been doing my research, knowing this would happen sooner or later and so we ordered a weBoost “Drive Reach RV”. It comes with an outside mast antenna that will mount on an RV ladder.

I mounted the antenna on the rear ladder, keeping it just under the 13’6” height restriction for some states. A good location for the booster was found inside and I drilled a hole through the floor to run the cable. Set up is pretty simple. Plug the antenna cable into the booster, plug the booster into the wall. The light flashes red a few times and then turns green. If you had a marginal signal you should have a better one now. It was better, but barely. The signal didn’t drop out as often as before, but it really wasn’t usable for work.

Walking around the campground, I struck up conversations with anyone that had a booster antenna on their rig. Everyone was having the same experience as me, no matter what network they were on. Everyone except the two families with their antennas on poles. They both reported a significantly stronger signal. One had two 10′ lengths of chain link fence rail and an elaborate system of brackets holding it to their ladder and staked to the ground. The other had a paint-roller extension pole bungee-corded to the side mirror of their motorhome. Both admitted that they were, uhm, less than elegant solutions…but they were solutions. I needed something reliable that could be put up or down in a couple of minutes and would raise my antenna 20 feet in the air. The right flagpole was the perfect solution.

The 22′ flagpole from “Poles and Holders” is a camping staple that has proved its worth in the NASCAR infield and the windiest of beaches. It’s seven telescoping sections compact down to 48” and store easily, though you’ll see we don’t have to store it!. It’s made to survive 40 MPH winds and can hold 2 flags. It even comes with a free American flag! Lay the pole out on the ground and fully extend it. Add the 3 locking pins and twist-lock the remaining sections. It’s meant to have a flag fly on each of the last two sections. Go ahead and put the black swivel rings on. The top section will still be used for a flag, but the second section is where our antenna will be.

At the bottom of the second section, wrap your heavy fabric around the pole. This will help keep the pole from being damaged and prevent the antenna from spinning on the pole. If you have some tape or a zip tie nearby it will help hold the material in place until the bolts are tightened. Assemble your weBoost outside antenna on it’s shortest mast as per their instructions. When assembling the antenna-to-ladder mounting bracket, place the saddles and u-bolts on top of the fabric. Be sure not to over-tighten the u-bolts and crack the flag pole.

The 25′ cable that comes with the weBoost can now be attached to the antenna. Be sure to tighten it securely because the wind will be banging it around and it will try to come loose. Use 3 or 4 of the Velcro cable ties to attach the cable to the flag pole.

Now it’s time to add the flag pole bracket to the ladder. It goes together pretty easily with the 2 sets of bolts, washers, and nuts. I attached mine to the ladder leg closest to the corner of the RV so it will be accessible. Turn it so that the ladder will be between the flag pole and your RV, so even in the strongest winds, the pole can’t make contact with your camper. You’ll want to mount this with the top about waist high since you’ll be trying to slide a 22-foot pole into it. Once the mount is secure, stand the flag pole up and into it. The first few times its kind of scary. Have a spotter so you don’t end up being “that” neighbor. We’re both pretty tall, so the top of our holder is 40″ above the ground, putting our antenna at 20 feet!

Route the cable down the ladder and under the RV, securing it with a few zip ties. You can now judge how much wire you have remaining and find a place to route it into your RV. Be sure to stay away from wiring, plumbing, and gas lines! Every RV is going to be different, so I’ll leave this part up to you. Remember after drilling your entry hole to seal it well with caulk. Take 5 minutes now to caulk or 5 days this winter trying to catch a mouse.

Once the cable is inside, attach it to your weBoost and then plug in the unit. Congratulations you’ve got a cell phone signal booster that’s picking up signals from around 20 feet in the air.

This setup is great for traveling. Not only does it store quickly, but it can be used while it’s stored! Remove the flag pole from the holder on the ladder. Starting at the top, remove and properly store your flag. Twist to unlock the top section of the pole and slide it down into the 2nd section. It may be a little tight from the antenna bracket. The antenna will prevent the second section from collapsing, but that’s okay. Remove the Velcro, unlock each section and continue collapsing the flag pole. When you’re done, the pole will be about 8′ tall and can be loaded back onto the ladder mount. Be sure the antenna doesn’t stick out above the top of the ladder.

Coil up the excess cable and secure it to the ladder with the Velcro ties. Once you get used to storing it, you’ll find you can hang the coil of cable over the ladder mount before replacing the pole. Your pole and antenna are securely stored and your booster can still be used.

NOTES
~ Even though the antenna is omnidirectional, we have found that turning it towards the cell tower helps in weak signal areas. Just grab the base of the pole and turn it.
~ A cell booster is not magical. It can’t make a signal appear where there isn’t one and it can’t increase bandwidth on over-crowded towers. So manage your expectations.
~ We often fly a flag and so far the antenna mounting has not damaged it.
~ Like many Rvers, we carry an 8′ Step ladder on a rack hanging from our RV ladder. It won’t sit flush anymore, but it still rides just fine. The flagpole can be raised and lowered without removing the step ladder. It has the added benefit of making it look much harder to steal the flagpole and antenna.
~ Every once in a while when the wind blew just right, the flagpole would make contact with the RV ladder. We could hear a low “thump.” I zip-tied a 4” piece of a pool noodle to the top of the ladder and we haven’t heard a sound since.
~ After nearly a year, we have only had a problem two times. During very high winds the top three sections collapsed into the fourth section. I figure the weight of the antenna is overcoming the twist-lock. It doesn’t damage anything and the booster keeps right on working…just 4 feet shorter.

The links lead to Amazon, where we will make a small commission off of a purchase. The price you pay will not be affected.

Comment below and let us know if you tried our solution!

Blog Categories
We use cookies on our website to give you the most relevant experience by remembering your preferences and repeat visits. By clicking “Accept”, you consent to the use of ALL the cookies.
.
Cookie SettingsAccept
Manage consent

This website uses cookies to improve your experience while you navigate through the website. Out of these, the cookies that are categorized as necessary are stored on your browser as they are essential for the working of basic functionalities of the website. We also use third-party cookies that help us analyze and understand how you use this website. These cookies will be stored in your browser only with your consent. You also have the option to opt-out of these cookies. But opting out of some of these cookies may affect your browsing experience.
Necessary Always Enabled
Necessary cookies are absolutely essential for the website to function properly. This category only includes cookies that ensures basic functionalities and security features of the website. These cookies do not store any personal information.
Functional
Functional cookies help to perform certain functionalities like sharing the content of the website on social media platforms, collect feedbacks, and other third-party features.
Performance
Performance cookies are used to understand and analyze the key performance indexes of the website which helps in delivering a better user experience for the visitors.
Analytics
Analytical cookies are used to understand how visitors interact with the website. These cookies help provide information on metrics the number of visitors, bounce rate, traffic source, etc.
Advertisement
Advertisement cookies are used to provide visitors with relevant ads and marketing campaigns. These cookies track visitors across websites and collect information to provide customized ads.
Others
Other uncategorized cookies are those that are being analyzed and have not been classified into a category as yet.
SAVE & ACCEPT