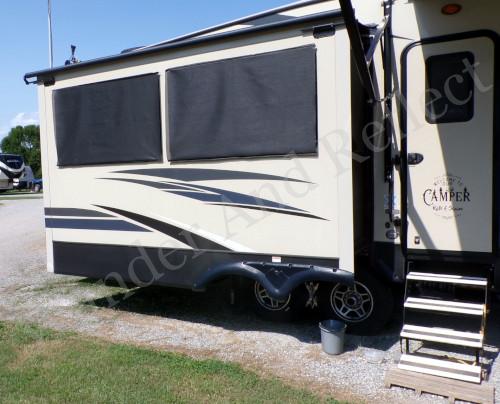 Cool off your RV with a quick DIY project!

It can get pretty hot in a camper when you’re sitting in the sun. Our families live in the South, so we spend way too much time in 90+ degree weather. During our first summer as full-timers, we knew we had to do something to reduce the heat inside our fifth wheel, and started researching. It was obvious the windows were letting in a lot of heat, so we did what campers have done for decades, add Reflectix. . . but it wasn’t enough.

In the simplest terms, Reflectix is bubble wrap with a reflective coating on both sides. It’s used as insulation in the construction industry and RV’ers use it to help keep the sun’s heat out of their rigs. You buy a roll and cut it to fit against the inside of your windows, but there are a couple of problems.

The engineer in me was not happy with letting the heat through the window and then trying to combat it. Awnings would be a great solution, but we had a problem. Besides being useless in windy areas and pricey, the big problem was they wouldn’t work on our windows.

Over the years I’d heard of people making up “solar shades” or “sunscreens” to put on their windows, but I had a lot of questions. Here are my biggest concerns and the answers I’ve found:

Needless to say, we were sold on the solar screens. I made the rest of them that day. Well, all but one, since I ran out of material. Not being able to finish them all turned out to be useful, since now I can document how to make them. I learned a lot on the first set, so this one will be easier, and quicker!

The links lead to Amazon, where we will make a small commission off of a purchase. The price you pay will not be affected. You probably don’t need that much frame rail, but when writing this that was the smallest amount being sold on Amazon. It can be found at most home improvement stores in single pieces and often longer lengths.

UPDATE: We’ve had a lot of questions about how well you can see out through the solar screens. Today I took down the screen on the left so that you could see a comparison. Ignore the dirty windows!!!

Let us know if you make a set of solar screens. Comment below and tell us how well they worked!

Blog Categories
We use cookies on our website to give you the most relevant experience by remembering your preferences and repeat visits. By clicking “Accept”, you consent to the use of ALL the cookies.
.
Cookie SettingsAccept
Manage consent

This website uses cookies to improve your experience while you navigate through the website. Out of these, the cookies that are categorized as necessary are stored on your browser as they are essential for the working of basic functionalities of the website. We also use third-party cookies that help us analyze and understand how you use this website. These cookies will be stored in your browser only with your consent. You also have the option to opt-out of these cookies. But opting out of some of these cookies may affect your browsing experience.
Necessary Always Enabled
Necessary cookies are absolutely essential for the website to function properly. This category only includes cookies that ensures basic functionalities and security features of the website. These cookies do not store any personal information.
Functional
Functional cookies help to perform certain functionalities like sharing the content of the website on social media platforms, collect feedbacks, and other third-party features.
Performance
Performance cookies are used to understand and analyze the key performance indexes of the website which helps in delivering a better user experience for the visitors.
Analytics
Analytical cookies are used to understand how visitors interact with the website. These cookies help provide information on metrics the number of visitors, bounce rate, traffic source, etc.
Advertisement
Advertisement cookies are used to provide visitors with relevant ads and marketing campaigns. These cookies track visitors across websites and collect information to provide customized ads.
Others
Other uncategorized cookies are those that are being analyzed and have not been classified into a category as yet.
SAVE & ACCEPT